Yes, yes… it’s been a while since my last post. Like, a whole season. I’m so sorry! I spent a ton of time last season travelling and I couldn’t seem to find the time to post. I promise I’ll do a better job of updating for you guys.

To give you quick summary of last season:
-I won National Push Championship

-After National Team Trials, I raced in a few races on the North America Cup.

-I won the Western Regional in Park City, UT. I had a lot of problems with this track in the beginning of the season, but I really think it started to click after spending a solid month there before the race. By winning this race, I have guaranteed myself National Team Trials in October.

-I went on the longest road trip of my life. My teammate and I drove my Honda Civic… In JANUARY from Virginia to Calgary, Canada… roughly 3,000 miles. We trained in Calgary at the site of the 1988 Olympics and then drove 1,000 south to Park City, Utah and trained there for a month and a half. Following training in Park City, we drove back to Lake Placid to finish out the season. I know, it seems crazy to drive that much, but we were out west for 2 months. My car gets good mileage and we wouldn’t have to pay for a car rental, which are outrageously priced.

Yeah, I can pretty much drive through anything now. What did I learn? South Dakota is a terrifying state during a blizzard. Adrienne and I took video and documented the whole thing. Gracie (another one of my teammates) drove back with me to Lake Placid and together we’re working on making a road trip video.

Here’s a quick summary of the trip:
-Leave Virginia, drive to Long Island and pick up Adrienne.
-Drive from Long Island to Chicago, spend 2 days with Erik (a former teammate in the windy city)
-Drive to Wall, South Dakota during a blizzard. South Dakota is the most desolate place I’ve ever visited. There were 50 mph winds and it was -30 degrees at night while we were driving. During the day it was -10 degrees. We drove through the Badlands, which I’ve posted some pictures of below. 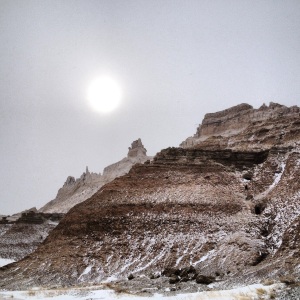 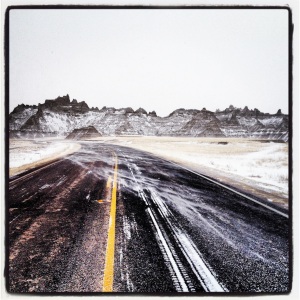 -We saw Mount Rushmore and Crazy horse which are both nestled in the Black Hills.

-We drove to Billings, Montana and spent the night there.
-We drove to Calgary and stayed with my friend from college, Phil. Phil happens to live about 2 minutes from the top of the track in Calgary. Amazing visit, and a great learning experience for Adrienne and I. We traveled there alone, and trained with the Koreans. No other Americans or Canadians were there.
-I saw 2 Bald Eagles on the drive. America!!

-Following Calgary, we drove to Park City and trained there for a month. This was our backyard. Utah is a beautiful place. In addition, Adrienne and I got there in time to attend Sundance Film Festival. I’d love to go back. We saw 3 movies. 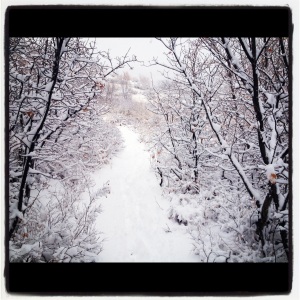 Overall, the season was full of ups and downs. Sled problems, confidence in driving, stress… the usual. But honestly, I ultimately I felt like I came out on top and learned some great things. I feel great going into next season. I have more posts, to make so stay tuned!

Poa kichizi kama ndizi . (I’m crazy cool, like a banana. 🍌) @peterliskibwana
What big trips do you all have planned for 2020? 😁
I spy christmas leftovers 👀😏
I would be remiss if I did not give a special shout out to @rhondamvetere. Because of this wonderful human, I’m closing out this decade with a once in a lifetime trip that simply cannot be replicated. This entire experience was made possible by YOU. Thank you for encouraging me to look outside my comfort zone, push my physical limits and spoil me with the most wondrous experience in Tanzania. You’re a force to be reckoned with and I’m fortunate enough to call you my #serengetigirlsrun companion, mentor and friend. ❤️❤️🏃🏻‍♀️🏃🏻‍♀️
I’m feeling some serious nostalgia today! @cnnafrica released the episode of Inside Africa on the Serengeti Girls Run that I participated in this fall. 🌍 These wonderful women were my companions for a week in the bush while we experienced the Serengeti to the max . Click the link in my bio to check out the story and please consider donating to the @grumetifund to support their women’s empowerment initiatives and wildlife conservation efforts 🐆🦏🐘
#latergram update: been a whirlwind week here in Lake Placid. Trying to brush off the dust and get back into the swing of sliding things after a wild and productive autumn. Skeleton really is, without a doubt, THE most fun. I have another week of sleigh riding here in Lake Placid before heading home for the holidays. More to come.
When someone opens the oven and that pie just might be ready #thanksgiving 🥧👀 . Thankful for a myriad of things this year. Wonderful humans, illuminating confidants and magical adventures. Also dogs.
when I wake up to a foot of snow in colorado 😐 #nothanks